Here at the Royal Albert Memorial Museum we are lucky enough to have the Percy Sladen collection, part of which was collected on the HMS Challenger throughout the exhibition. Percy Sladen was a scientist born on 30th June 1849 who grew a good reputation as a biologist.

He was presented the starfish material to identify after the exhibition was over. He was the only person Thomson and Carpenter (who led the expedition) could find that would be capable of managing to analyse the starfish. The ship had covered about 70,000 nautical miles and over the 354 stations sampled the crew had collected a lot of starfish! Sladen travelled all around Europe to speak to and gain connections with specialists that could help him a long the way. It is said that his hard work and dedication to the project could have been linked to his early death. He died in 1903 and his wife gave the whole collection to RAMM to make sure it was kept together.

Parts of the Percy Sladen Collection from the HMS Challenger

Take a look at a few of the pieces he studied… 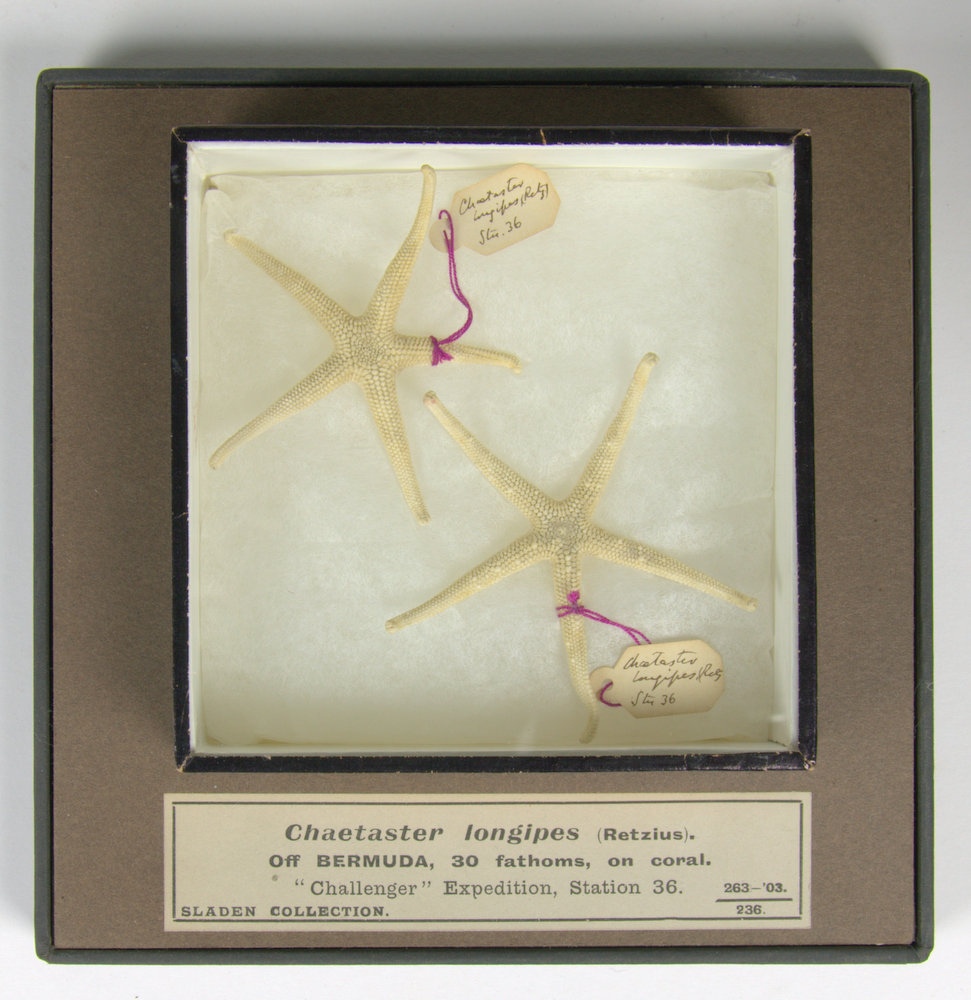 The picture on the left shows a small starfish whose latin name is ‘Lophaster stellans’. This little star doesn’t seem to have a common name. As you can see, the starfish was found south of Wellington island (off of Chile). We also know that is was found on ‘blue mud’. As far as we know, blue mud is so called because of the blue colour caused by organic material and iron sulphide. It is made up of silt and clay. Another thing to notice on the label is that it is from station 308 so we know that it was found in January 1876.

The picture on the right shows a couple of starfish – a different species ‘Chaetaster longpipes’. These were found off Bermuda at station 36 on some coral- so a few years earlier in April 1873.

All the collection is catalogued – he had a lot of specimens that aren’t Challenger specimens too. We are in the process of putting the Challenger data in to a suitable format for our new database. I just realised I haven’t updated you on that yet! We are speaking to museums around the country and also abroad at the moment to talk to them about the project. We are slowly getting our data and data from the Natural History Museum together. We are using this to create fields for the database and to start designing the website. Once we have a secure design and the initial data is uploaded and tested, we will be moving on to further museums to add their collections.

For anyone that has clicked on this post and is not aware of what the project is about, click here!

Speak to you all soon!